This article is the second instalment in the Golden Age(s) series.
To most people, the period I am now about to discuss is the one and only Golden Age. A time of eccentric detectives and baffling mysteries when the genre reached unparallelled heights of virtuosity and ingeniosity. A time when locked-room murders and dying messages were business as usual and the police would routinely turn to gifted and wealthy amateurs to solve the most complicated cases. A time when the game element of the genre was emphasized with many books including challenges to the reader and rules being set out to prohibit cheap tricks. And yet a closer look at the period paints a more complex picture, one that is rife with contradiction and dissension; it also helps to correct some enduring misconceptions.
Middle Golden Age for the most part continued, amplified and institutionalized the changes initiated in the previous period; it also added a major one of its own. Early proponents of fair-play valued it on both aesthetical and ethical grounds; to hide major clues from the reader ruined the story's overall effect and was an appalling thing to do. Their successors, on the other hand, objected to not playing fair because it was cheating. The detective story, in short, had become a game, a "recreation of noble minds" and games need rules. Mgr. Knox in Britain and S.S. Van Dine in America were happy to oblige. While the former was chiefly concerned with purging the genre of antediluvian clichés that still showed up now and then, the latter's commandments amounted to a bill of divorce from standard fiction.
Practice differed sensibly from theory, however. Middle Age detective fiction for all its challenges to the reader and assertions of fair-play was actually more akin to prestidigitation than cluedo. The author presented the reader with a baffling problem and - ideally - gave him all of the clues, yet at the same time used his best smoke and mirrors to make sure he couldn't make sense of the evidence, revealing in the end the unsuspected truth to general bafflement then thunderous applause including from the defeated reader. Pace Van Dine, the closer equivalent to a detective story was not a ball game or a cross-word puzzle but a magician pulling a rabbit off his hat.
One might think - and it has often been told - that this conception of the detective story as well as the existence of a firm corpus of "laws" resulted into standardization - authors writing much like the other, books so alike that reading one spared one reading the rest. Another frequent criticism is that by focusing on the plot and viewing their books as mere games, authors ignored or at least neglected characterization, "realism" and social comment. Both criticisms are correct to an extent, and wrong on the whole. The period admittedly had its share of formulaic writing of no more literary merit than a sudoku problem but it was not the end of the story. Contrary to popular wisdom, playing "the grandest game in the world" was not contradictory with literary ambition (Sayers, Wade) genre-bending (Carr) parody (Innes) or wild imagination (Mitchell) Also contrary to accepted wisdom, whodunit is not the only genre thriving in the period. Middle Golden Age also sees the dawn of hardboiled (Hammett) and noir (Cain) fiction as well as of the crime novel (Francis Iles, Richard Hull, Mrs. Belloc Lowndes) whereas the transmutation of HIBK into suspense is underway with Ethel Lina White in Britain and Elisabeth Sanxay Holding in the US.

At the core of Middle Golden Age writing was the triumphalist notion that crime was only a temporary disruption in the immutable order of things and that reason would always prevail. This notion suffered repeated blows in the Thirties as totalitarian regimes took hold of Europe and war became increasingly probable. Detective fiction by the end of the period is more prosperous and fertile than ever, but the seeds of doubt have been sown with Berkeley and Sayers defecting and newcomers displaying a more skeptical attitude to the rules of the genre as well as its ethos.

As with the former period, Middle Golden Age closes with a Christie book, this time And Then They Were None which fittingly appeared in 1939. This book, one of its author's masterpieces, combines the extreme cleverness in plotting which is typical of the genre and the era with a gloomy worldview that is much less so: No one on Indian Island is innocent and there is no Poirot, Holmes or Wimsey in sight to rescue the inhabitants from their fate and restore order in the end. The jolly days of Mayhem Parva were gone; now detective fiction must deal with the sound and fury of a definetely disordered world. How it would an whether it could is what we'll see in the next and final instalment in this series. 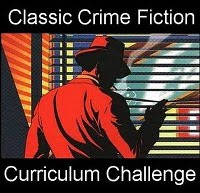 Rob Kitchin has a challenge for classic mystery aficionados:
Imagine a reader new to crime fiction and wanting an education in the classics. Or consider a seasoned crime fiction reader who’s barely read a crime novel published prior to 1970. Well I’m that latter reader. I’ve read several hundred crime novels but nearly all of them are from the contemporary period. This is the year I intend to right that by reading some of the crime fiction canon. What I need though is a curriculum - a list of ten must-read crime fiction classics.And this is where I need some help. So to that end I’m setting up a relatively straightforward challenge, one that doesn't even require any reading. The challenge is to set a ten book, pre-1970, crime fiction curriculum and to either post the list on your own blog and send me the link or post the list in a comment to this post by January 31st. I’ll then compile a curriculum based on the most popular choices (and provide link-backs to posts). Ideally, the selection of books needs to try and capture different crime fiction sub-genres and styles.
Needless to say, I have a plenty of suggestions, but Rob wants only ten books. All of those I have in mind have an equal claim to greatness and importance and choosing one rather than another is a pretty painful experience, but that's what challenges are about. So here is my not-so-final round-up of the ten mysteries you should read before I change my mind again; it is as varied as could be given my admittedly biased tastes, but no one I think will waste his/her time checking these out.
John Dickson Carr, The Emperor's Snuff-Box - His most atypical work in many respects - no impossible crime, no hint of the supernatural and no Fell/Merrivale - but a towering achievement all the same for its deceptively simple plot and excellent characterization (go read it and tell me Carr had no sense of character...)

Agatha Christie, Five Little Pigs - Not her most-often cited book, but the one where she's really at the height of her powers as both a plotting genius and a writer.

Wilkie Collins, The Moonstone - If you are to read only one detective novel in your life, be it this one (or The Hound of the Baskervilles)

Sir Arthur Conan Doyle, The Hound of the Baskervilles - If you are to read only one detective novel in your life, be it this one (or The Moonstone)

Stanley Ellin, The Eighth Circle - A private eye novel with a difference by one of the greatest short-story writers ever.

Cyril Hare, An English Murder - A dirge for a society, a class-system and a whole genre; the mystery equivalent of Jean Renoir's The Rules of the Game.

Charlotte Jay, Beat Not the Bones - A thriller like no other: Joseph Conrad meets Cornell Woolrich.

Margaret Millar, A Stranger In My Grave - Her whole output would deserve inclusion here; I'm picking this one in particular because of its superb title and the character of Steve Pinata which sadly never reappeared again.

Dorothy L. Sayers, Whose Body? - One of the most brilliant debuts in the history of the genre, and the best was yet to come.

Readers of this blog are strongly encouraged to submit their own "classics" in the comment section.

The Moonstone is one of my personal candidates for the title of best mystery novel ever written (other nominees include The Hound of the Baskervilles, Gaboriau's Le Crime d'Orcival or J.D. Carr's The Three Coffins among many, many others) and this review sums up what makes this book so great very well.

Believe it or not, it remained on my shelves for ten years before I actually got around to read it - I was negatively impressed by the length of the book as well as by his age; surely its only interest was of a historical kind. And then one day I finally opened it, read the first three pages and I was hooked. I couldn't put it down and the only disappointment I felt when finally closing the book was that it was already over.

Pace Barzun, T.S. Eliot had every right to label this book "the [...] greatest of English detective novels" (he also thought it was the first, but was wrong on this count as primogeniture belongs to Charles Felix's obscure The Notting Hill Mystery) as everything about this book is perfect or near-perfect from the masterful construction to the equally wonderful characterization. It is also strikingly modern, absolutely not the period piece you might expect. One century and a half ago, the detective novel had already taken on most of its definitive shape and to see it emerge before one's eyes is but one of the book's many pleasures.

Now talking about it makes me feel like reading it again. A good way to start a new decade, isn't it?
Publié par/Edited by Xavier à 18:56 1 commentaires